Inflation Runs Out of Steam in February

According to today’s report from the Bureau of Labor Statistics, consumer prices grew a modest 0.3% in February, down considerably from 0.6% in January. On an annual basis, the all-items index (CPI-U) was up 2.7% in February and 2.5% in January. These are the highest annual rates in nearly five years (see graph below). Excluding food and energy, consumer prices were up 0.4% in February and 2.2% over the 12-months ending in February. These were the numbers analysts had expected. 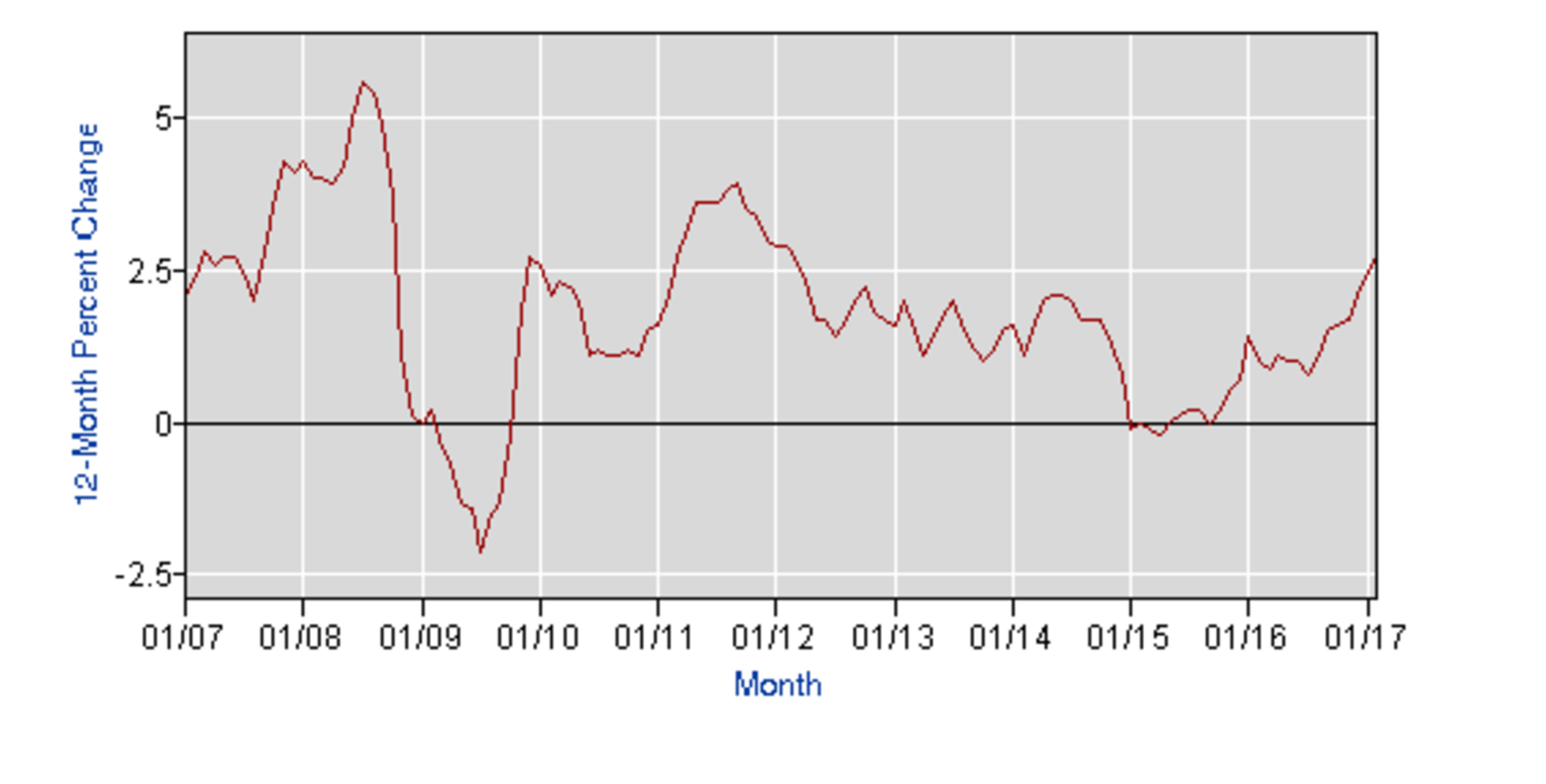 Year-over-year, the price of food was flat in February despite plenty of volatility in grocery store prices. The price of meat declined significantly, including uncooked ground beef, down 6% and ham, down 3.9%. The price of eggs reportedly dropped 23.6% over the same 12-month period. The index for fresh vegetables fell 7.2% and fruit prices were down 4.3%. These declines were somewhat offset by higher prices for fish and seafood, up 3.4% for the year. Overall, the grocery store index fell 1.7% on an annual basis, while the index for food away from home added 2.4%.

For the year ending in February, the energy index advanced 15.2%. The soaring price of energy commodities was tempered by more modest growth in the price of energy services. Energy commodities, which account for roughly half of the energy index, were 29.8% more expensive in February compared to a year earlier. This is largely the result of higher prices at the pump; the gasoline index grew 30.7% year-over-year. Over the same period, the index for energy services (which includes electricity and utility piped gas) was up 3.5%.

There was a downward trend in the price of many retail commodities over the relevant year. The index for household furnishing and supplies fell 1.7%, while the apparel index inched up just 0.4% and prices for recreational commodities dropped 3.3%. Transportation commodities, which do not include motor fuel, posted a 1.2% annual decline in prices. While the price of new vehicles was up 0.5%, the index for used vehicles dropped 4.3%.

The index for transportation services grew 3.6% annually despite declines in the cost of car and truck rentals, reportedly down 1.7%. Over the same period, the index for motor vehicle maintence and repairs added 2.5%. The major reason for higher transportation service costs was a 7.6% spike in motor vehicle insurance rates. Intercity train fairs also jumped a notable 5.4%.

The price of medical care commodities appreciated significantly over the year. That index was up 4.1%, mostly the result of a 5.2% annual increase in prices for prescription drugs. Similarly, medical care services recorded a 3.4% year-over-year increase. The price for physician services was 3.6% higher compared to a year earlier while the index for hospital services was up 4.3%.

Shelter is the largest component of the all-items index, accounting for over a third of its total. The shelter index, up 3.5% over the year ending in February, is mostly comprised of rental costs including owners equivalent of rent, which is a reflection of home values. The index measuring owners equivalent of rent climbed 3.5% while those renting their primary residence saw costs rise 3.9%.

In February, the price of food gained 0.2% with both the index for food at home and food away from home rising at that same rate. Three of the six components of grocery store consumption increased by 0.2% over the month; cereals and bakery products, meats poultry fish and eggs and fruits and vegetables.

The energy index declined on a monthly basis, down 0.7% in February. Although energy service prices added 0.5%, a 2.0% decline in the the energy commodity index more than offset the rise. Volitile gas prices were once again responsible for changes in the energy index. Prices at the pump dropped 2.1% in February. Gasoline accounts for roughly 3.4% of the all-items index and nearly half the energy index. The graph below illustrates the average price of regular unleaded gasoline per gallon over the past decade. 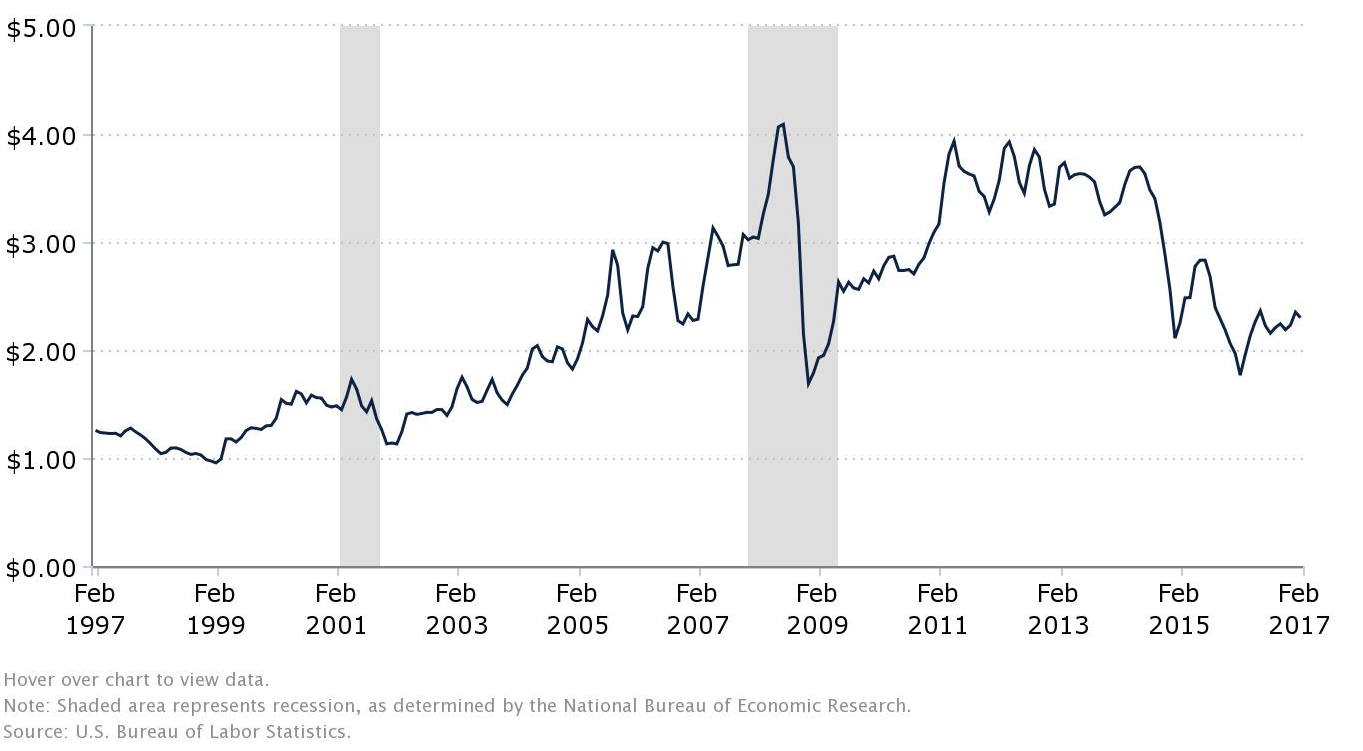 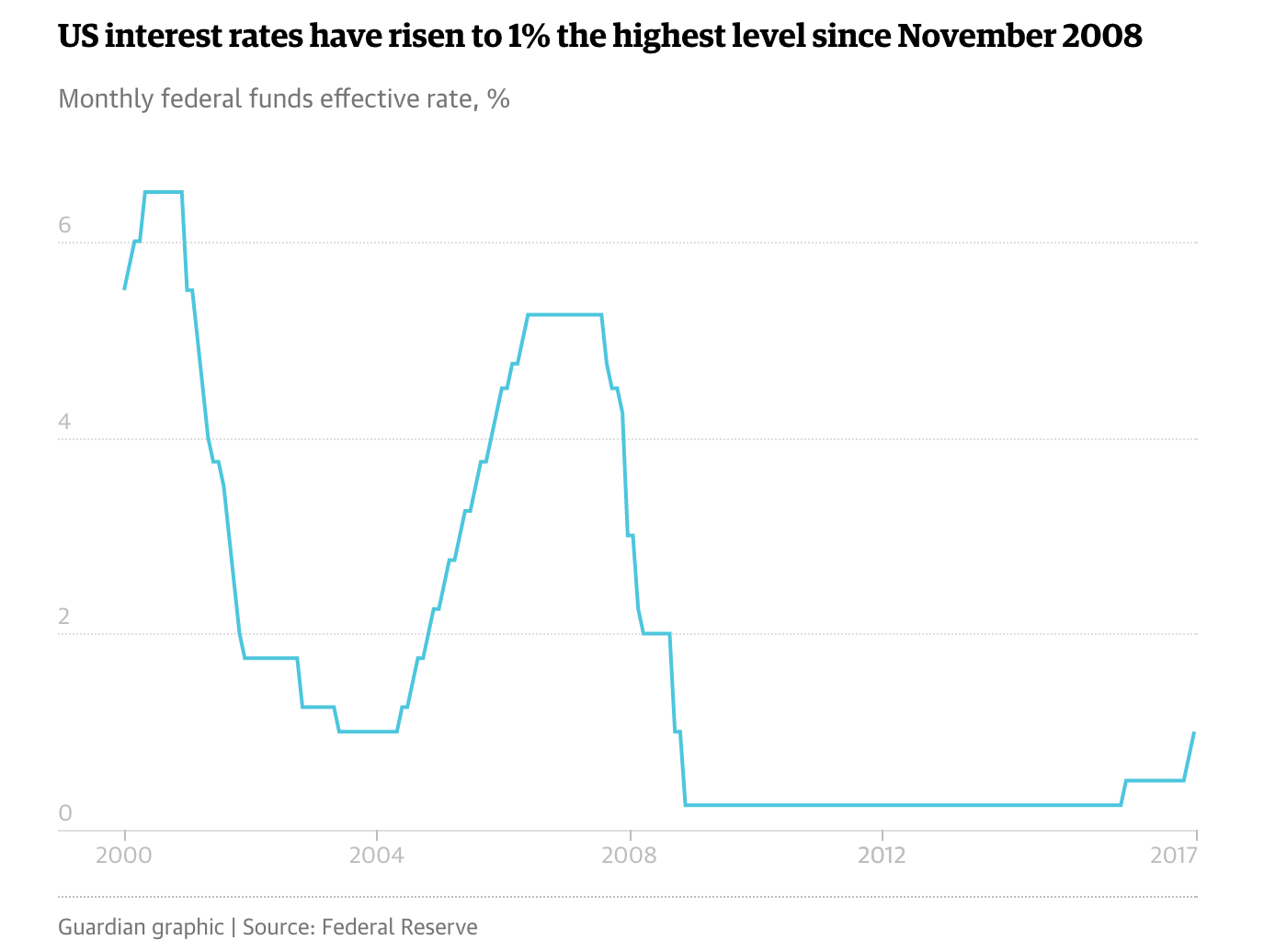 Inflation appears to have rebounded despite February’s low monthly rate. The CPI-U has surpassed the Fed’s annual 2% target after remainingy stubbornly low throughout 2015 and most of 2016. Along with higher inflation, employment and economic growth numbers support today’s decision by the Federal Reserve to raise interest rates. The optimism reflected in the stock market also indicates the economy may need to be reigned in. Today, interest rates were increased by 0.25% to a range of 0.75% to 1.0%. Higher rates make borrowing harder for business and consumers but also keep prices from growing to quickly, which is good for the consumer. The Fed did not alter their outlook for 2017, two more rate hikes are expected this year.