Inflation Heats up In January

Consumers paid more for almost everything in January compared to a month earlier. Headline inflation hit 0.6% for the month after posting a decline in November and no change in December. Inflation in January was well above 2016’s average monthly rate of 1.5%. Year-over-year, consumer prices were up 2.5% in January, slightly more than analysts expected and the highest annual rate since March 2012. 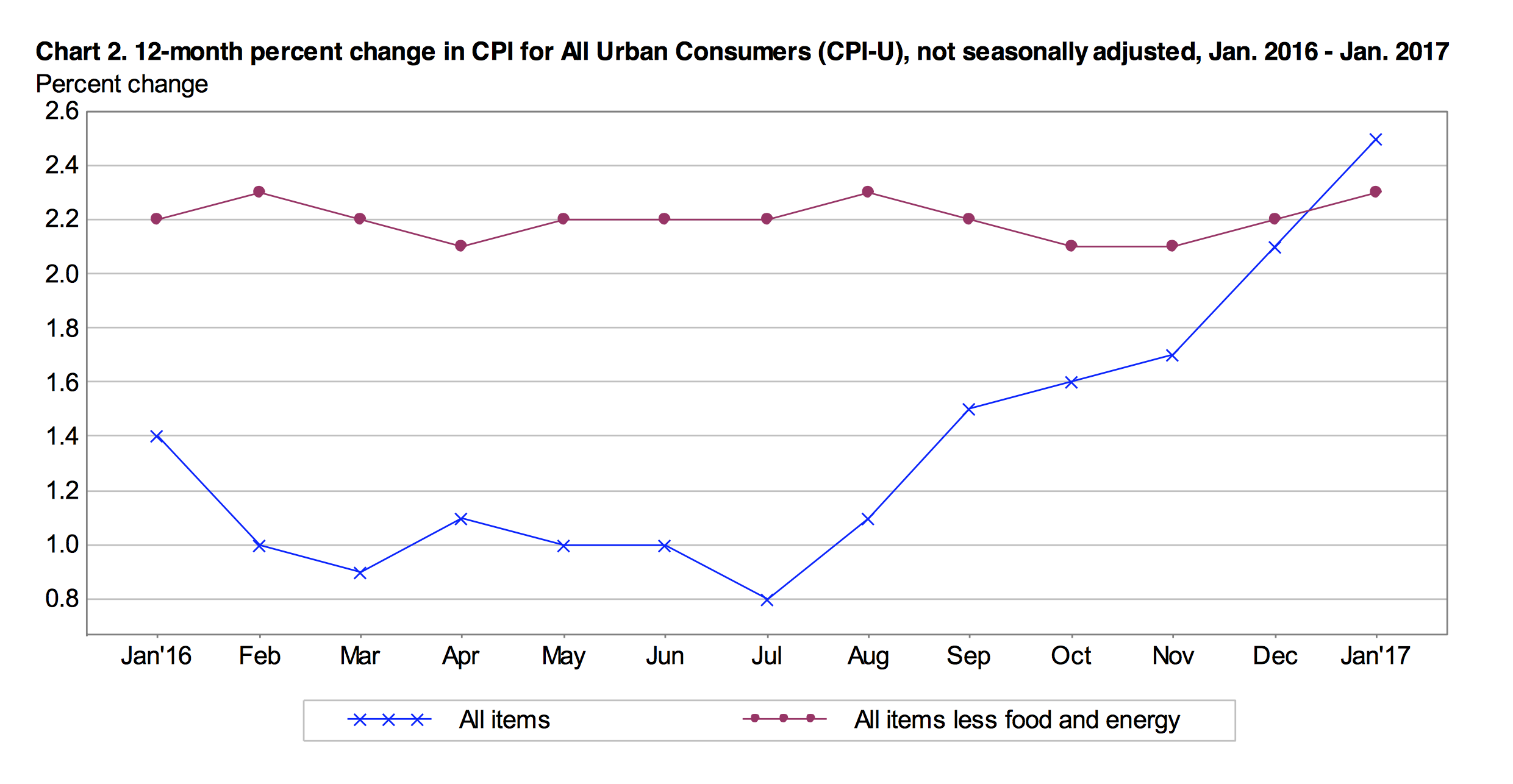 Today’s report from the Bureau of Labor Statics supports the Fed’s case for raising interest rates. However, the CPI-U is not the their preferred measure of inflation. They focus more on the personal consumption expenditure index (PCE), which remains below the 2% target. January’s strong consumer price report coincides with positive retail and employment data – more indications that it’s time to move towards less accommodative monetary policy.

The food index added 0.4% in January as both the index for food at home and the index for food away from home climbed 0.4%.  Grocery store prices increased across the board; the index for dairy and related products was up the most, climbing 0.9% and the index for cereals and bakery products ticked up 0.6% month-over-month. Fruits and Vegetables was the only component of grocery store spending to decline, down  a monthly 0.1% which becomes a much larger decline of 1.7% after seasonal adjustments. The seasonally adjusted  food index inched up 0.1% after remaining flat for most of 2016. Similarly, seasonally adjusted grocery store prices were flat in January, ending a series of declines.

Core inflation, which excludes food and energy, was up 0.4% in January. With seasonal adjustments, core inflation was 0.3%. Within the core index, the price of new vehicles increased 1.1%, while prices for used cars and trucks fell 0.1%. Used cars and trucks was the only major expenditure category in the core CPI–U to decline over the month. Core commodity prices were up 0.5% and core services were up 0.3%. The service indexes for both medical care and transportation added 0.4%. Also notable, Airline fares spiked 1.4% in January.

The shelter index, which accounts for roughly one third of the all-items indexed, was 0.3% higher in January. With seasonal adjustments, growth in the price of shelter slowed in January, to 0.2% from 0.3% in both November and December.

Although energy prices surged over the year ending January, core inflation was also strong, up 2.3% year-over-year. Stagnating food prices countered the impact of higher energy costs within the all-items index. Food prices fell an annual 0.2% in January while the price of gasoline pushed 20.3% higher. The graph below shows the 12-month change in the food and beverage index falling throughout 2015 and 2016. Overall grocery store prices were down 1.9% for the year ending January and the cost of food away from home reportedly climbed 2.4%. 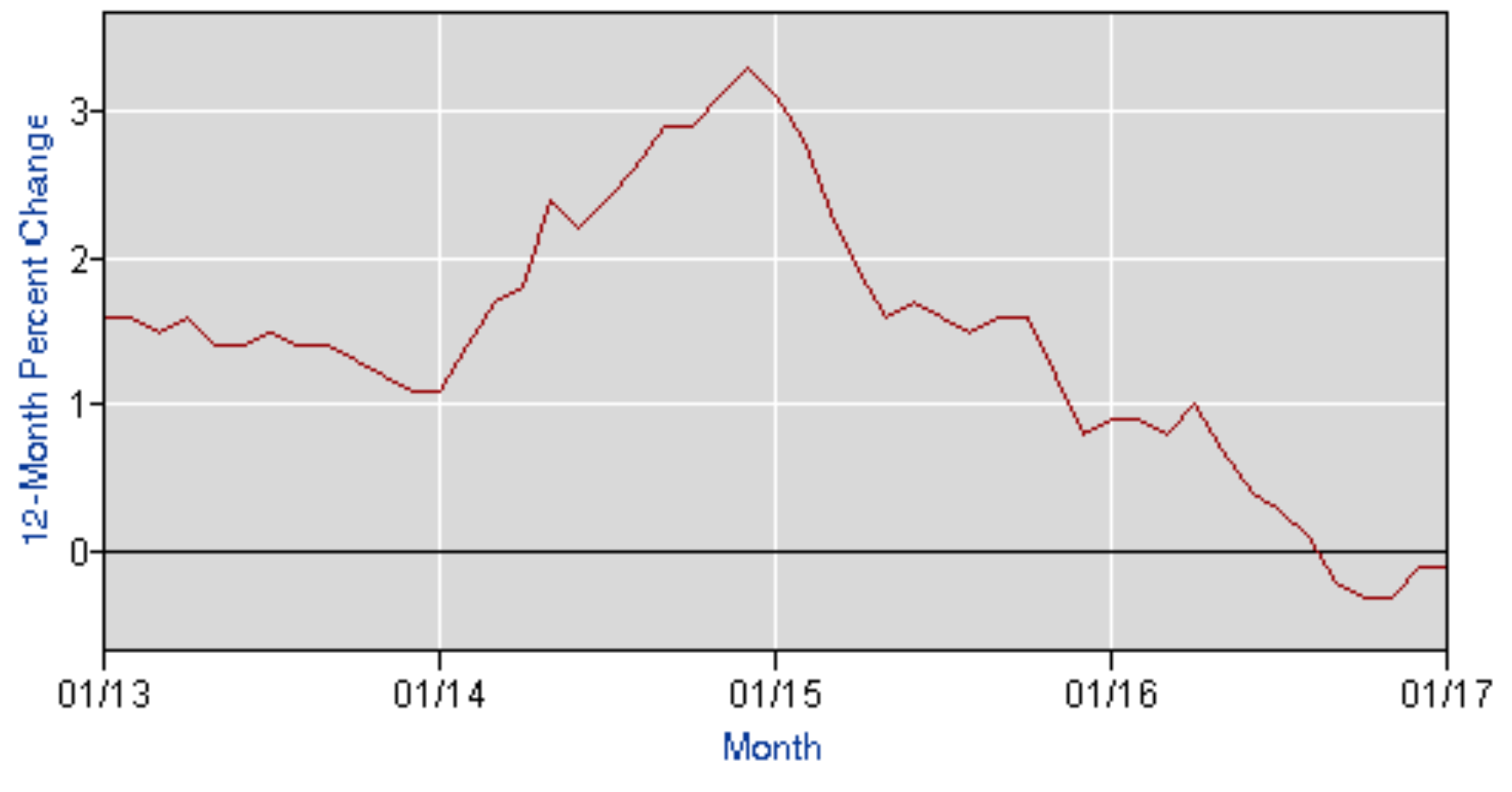 The jump in the energy index was caused by higher gas and fuel oil prices. Energy commodities represent roughly half of the energy index, which is close to 7% of the all-items indexed. A 20% spike in the energy commodity index contributed nearly 0.7% to overall inflation for the year. Energy services, on the other hand only added 2.9% over the 12-month ending in January.

Within the core index commodity prices slid 0.2% over the year, largely the result of a 3.7% decline in the price of used cars and trucks. In general, commodity prices were up for the year, with medical Medicare commodities rising the most, up 4.7% annually.

Shelter prices were significantly higher year-over-year; that index was up 3.5%, including 3.9% growth in the index for rent. Medical care and transportation services were also more expensive, up 3.6% and 3.2% respectively. Despite spiking in January, Airline fares fell 3.3% for the year.

Addressing congress this week, Chairman of the Federal Reserve, Janet Yellen spoke of the possibility of rate hikes as soon as next month. She also warned of the dangers of waiting too long to raise rates and potential damage if it became necessary to raise rates quickly. Yellen also stressed the importance of sticking to the Fed’s dual mandate – stable inflation and full employment. While generally positive in her outlook for the US economy, Yellen noted the high level of uncertainty that exists in today’s political environment. Earlier this month the FOMC opted to ‘maintain the target range for the federal funds rate at 0.5% to 0.75% percent [and keep] the stance of monetary policy accommodative.’