Inflation climbed above the Fed’s 2.0% target rate to round out 2016 with the highest year-over-year rate since June 2014. December’s inflation report from the Bureau of Labor Statistics did not surprise markets, that expected the data to reflect growing strength in the economy. Headline inflation, as measured by the consumer price index for all urban consumers (CPI-U), was up 2.1% year-over-year in December, the highest annual (December to December) rate in five years and significantly above the 10-year average of 1.8%.

Annual inflation spiked from 1.7% in November and has been accelerating since July.  The all items index also continued to move closer to the core index as food and energy prices move in opposite directions. The core index (all items less food and energy), which is designed to be less volatile, was up 2.2% in December. 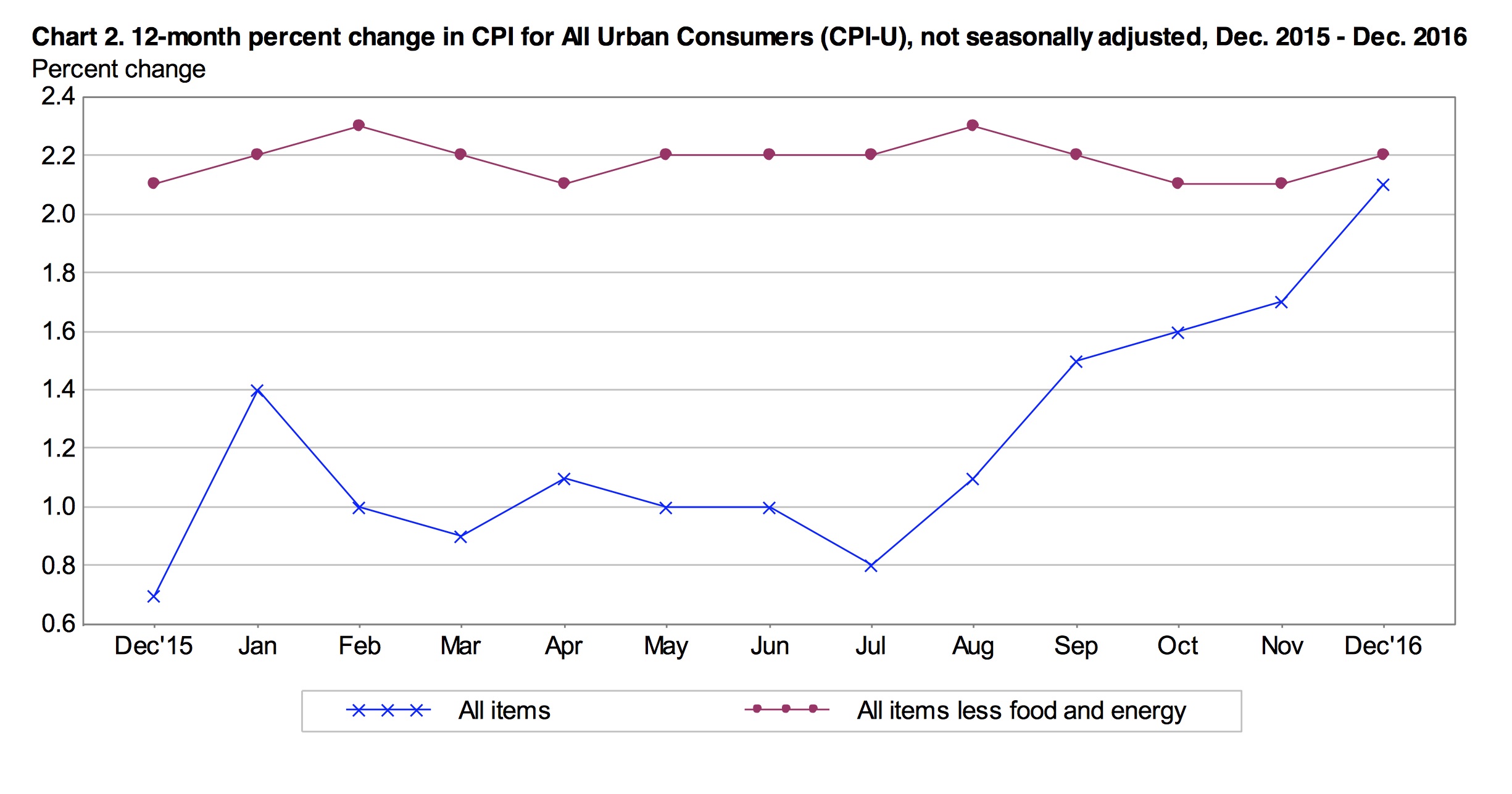 Energy prices were up a seasonally adjusted 1.5% in December, largely because of a 3.0% spike in prices at the pump, measured by the gasoline index.  The price of fuel oil also jumped 0.6%. Excluding food and energy, the all items index was up a monthly 0.2% to match the rate in November. Within this core index, the price of used cars and trucks added 0.5% and the index for transportation services grew by 0.6%. The price of shelter continued its steady climb, adding 0.3% month-over-month. Medical care prices also inched up with medical care service costs increasing 0.1% and medical care commodity prices up 0.4%. Balancing some of this growth, the price of apparel reportedly dropped 0.7% in December following a 0.5% decline in November.

Over the year, the price of food slipped 0.2% as prices at the grocery store continued t0 decline.  The index measuring the price of food at home fell 2.0% in 2016 with prices at the grocery store were down in all six major categories. The index for fruits and vegetables declined 2.4% year-over-year in December. At the same time, the index for meat, poultry fish and eggs dropped 5.4% and dairy prices were down 1.3%. The index for food away from home moved in the opposite direction, up 2.3% year-over-year. The net result was a marginal decline in the food index as food at home accounts for a larger share of the food index compared to food away from home.

Excluding food and energy, core inflation was a healthy 2.2% in 2016, marginally higher than 2015’s core rate of 2.1%. Core inflation was led by growing shelter prices, up 3.6% year-over-year as rent prices climbed 4.0%. Medical costs also contributed to higher overall prices for the year, up 4.1%, largely the result of a 6.2% jump in prescription drug costs.

December’s inflation report potentially points to the end of a long period of slow inflation and hesitation about raising interest rates. Although there is an unprecedented amount of uncertainty in the markets, the economy appears to be strengthening. Inflation has been the missing piece in the Fed’s criteria to raise rates, which have remained stubbornly low for roughly four years.

After raising the benchmark overnight interest rate by 0.25% to a range of 0.50% to 0.75% in November, the Federal reserve expects they will need three rate hikes in 2017 to keep the economy from overheating. If inflation continues to accelerate, the fed will likely be raising rates more than anticipated this year.