The consumer price index climbed 0.2% in September according to today’s inflation repot from the BLS. Higher prices for shelter and energy bolstered monthly inflation. For the year ending in September, the CPI increased 1.5%, the highest 12-month rate in nearly 2-years. Annual inflation was driven by growing shelter, transportation and medical care costs.

Core inflation, which eliminates volatile food and energy prices, was up 0.1% in September with seasonal adjustments, compared to 0.3% in August. The deceleration in core prices does not support the Fed’s intention to raise interest rates in the coming months. Core numbers better indicate true economic growth compared to headline inflation, which tends to be swayed by volatile gas prices.  The chart below shows the monthly percentage changes in the core and all-items indexes over the past 13-months. On an annual basis, unadjusted core inflation was 2.2% in September, close to the Fed’s 2% annual target rate. 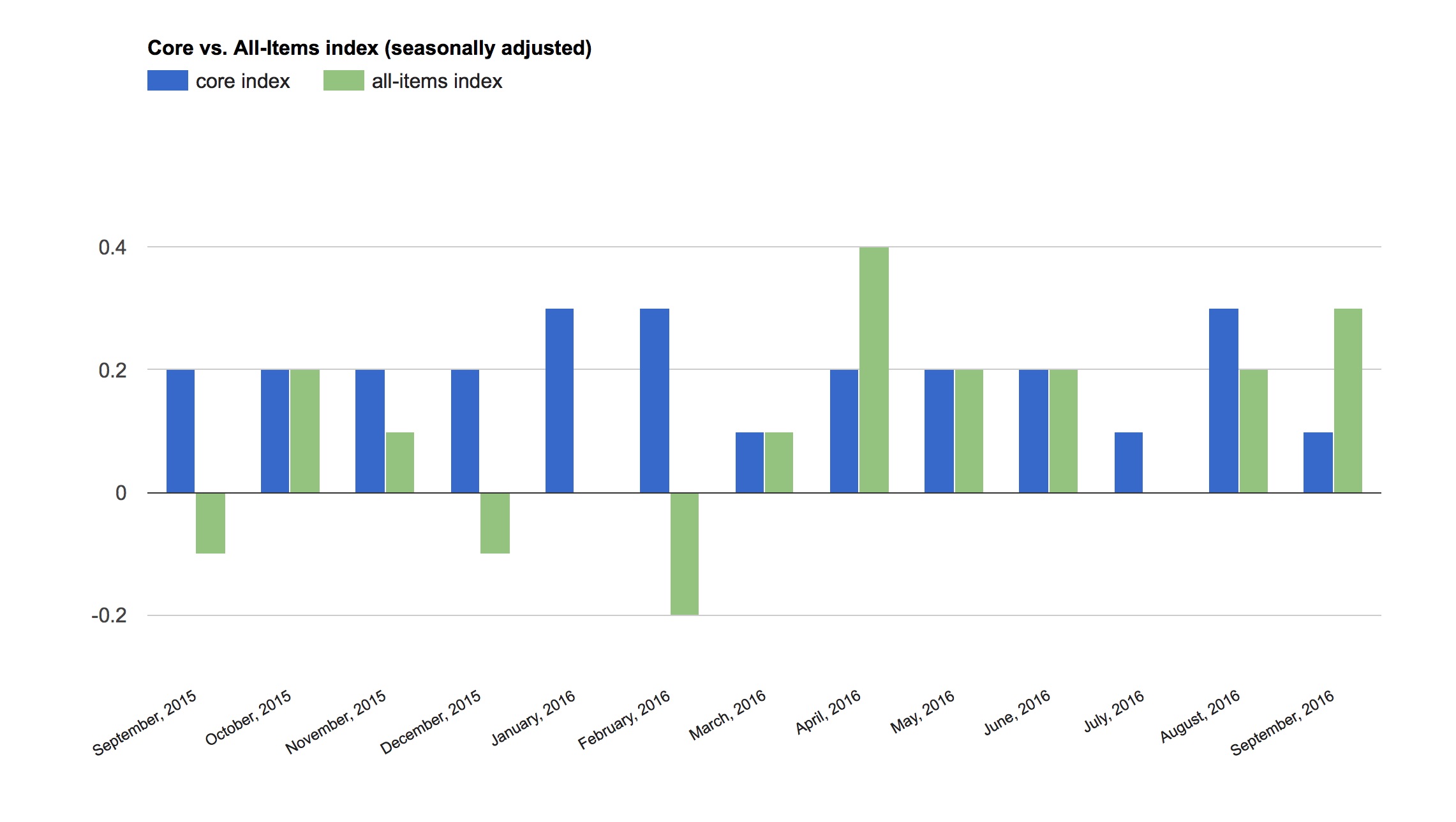 The food index was flat after seasonal adjustments in September for the third consecutive month. The price of food at home declin

Energy prices were the main driver of September’s inflation; the seasonally adjusted energy index was up 2.9%. Within this index (which accounts for around 7% of the overall CPI) the index for energy services (piped gas and electricity) was up 0.7%, while energy commodities spiked 5.5%. Gasoline accounts for approximately 44% of the energy index and just over 3% of the all-items index. The graph to the right illustrates the price of gasoline over the past two years. At the pump, prices climbed 5.8% in September, which basically offset declines in July and August.

The shelter index was 0.4% higher in September as the cost of rent grew 0.3% and owner’s equivalent of rent was up 0.4%.  Medical care costs inched up 0.2% including a 0.8% spike in the index for prescription drugs. Offsetting these inflationary trends, the index for communication declined 0.8% and the apparel index fell 0.7%, both on seasonally adjusted bases in September.

Growth in the all-items index over the year was driven by increases in the costs of medical care, shelter and transportation. The medical care index added 4.9%, year-over-year. Notably, the cost of inpatient hospital services was up 6.3% and the price of health insurance reportedly grew by 8.4%. Shelter costs were up 3.4% from September 2015; the rent index increased 3.5% and owner’s equivalent of rent was up 3.4%. Also, the index for moving costs jumped 9.4% over the relevant year. Transportation services were 3% higher, including 6.4% higher motor vehicle insurance costs.

The food index declined 0.3% on an annual basis in September. The price of food away from home added 2.4%, while the price of food at home slipped -2.2%. At the grocery store, most items were less expensive year-over-year. Significant declines include the price of coffee, down 2.8% and the index for meat, poultry, fish and eggs, which fell 6.3%. The price of eggs was reportedly down 37.6% over the 12-month period.

The energy index fell an annual 2.9%, its smallest annual drop in 2-years. Gasoline prices were down 6.5%, which reduced the all-items annual growth rate by a full quarter of a percentage point. Stripping out energy, inflation was 1.8% for the 12-months ending in September. Interestingly, the index for only commodities fell 1.1% year-over-year, while the index for services was up 3.0%.

In September, inflation was distributed relatively evenly across geographical regions. However, smaller urban areas (those with populations under 50,000) saw slightly higher growth in overall price levels. This was particularly true in the south where smaller cities posted 0.6% monthly inflation, three times the national average. Year-over-year, inflation was largely concentrated in larger cities in the West. Cities in the West with populations over 1.5 million saw prices jump 2.4%, compared to 1.5% for the country as a whole.

There is very little economic data that suggests raising interest rates would be prudent in the current environment and yet many foresee a rate hike this year. The Federal Reserve has clearly stated their intention to raise rates and will be debating if meeting the expectations they have set is more important than basing rate decisions on real data. According to Stanley Fischer, Vice Chairman of the Federal reserve:

“Changes in factors over which the Federal Reserve has little influence–such as technological innovation and demographics–are important factors contributing to both short- and long-term interest rates being so low at present.“

These factors are depressing interest rates across the globe and are unlikely to change in the foreseeable future. Economies are adjusting to slower long term growth, aging populations and post-recession readjustments. This means lower long term interest rates in the US and around the world. The federal reserve is divided on wether to raise rates. Higher rates make the economy more resilient to downturns but also put the breaks on growth and potential output.