In a worrying continuation of last month’s data, medical prices surged +0.7% MoM and was the highest contributor to the Core inflation figure.

The slightly than higher Core CPI numbers are causing a sharp spike in the Dollar Index post announcement, however the relatively benign number combined with the slowdown in nearly all major economic indicators over the past month are likely to reduce the possibility of any potential rate hike at the Fed’s upcoming June policy meeting. Markets are awaiting Fed chief Yellen’s commentary later today for any revised signal in rate expectations.

Economic Indicators have been weak across the board

Recent data from the Philly Fed indicate a slowdown in the manufacturing sector with the index posting further declines in May, posting a 6.7 print versus 8.0 consensus estimates. Despite a brief bounce in April, the index has now missed expectations for 7 out of the past 9 months and is growing reflection of the malaise starting to creep into the real economy. Prices paid for new orders plunged at an alarming pace, with declines also present in the average workweek. 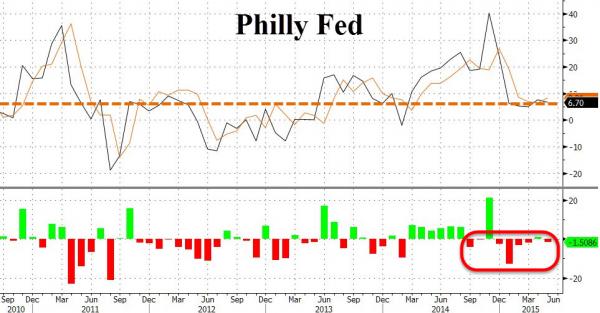 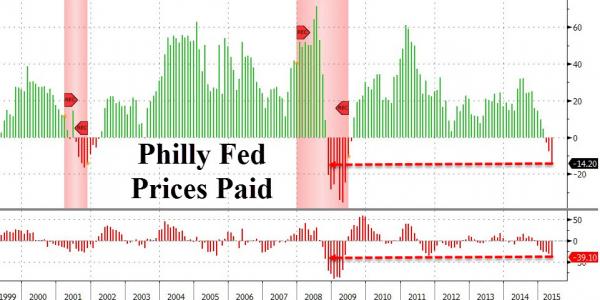 The Markit US Manufacturing PMI survey released earlier this week reinforces the evidence of further weakness creeping into the manufacturing sector. May PMI data slowed to 53.8 versus expectations of 54.5, and extends the weakness of the April data which registered the biggest miss of expectations on record. Manufacturing PMI is now at it lowest level in over a year when the US was gripped in the middle of severe winter weather. PMI weakness is a growing trend across the world, with European, and Chinese surveys all pointing in a similar direction. 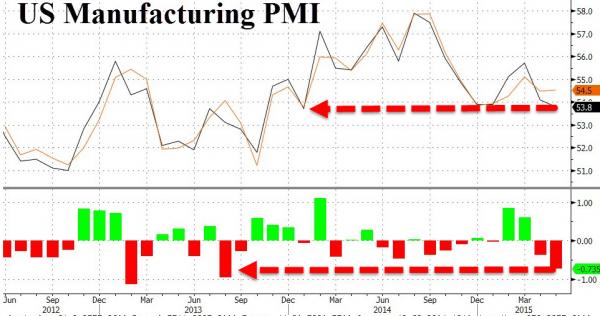 The strong dollar has been attributed with causing most of the headwinds for the manufacturing sector and is likely to be a concern for policy makers going forward. Declining export sales highlight further problems with the strong dollar, with US data falling for the past two consecutive months. April also saw the first rise in input costs for 2015, as the rebounding crude oil price began creeping into production costs.

Given the impact the stronger dollar is having on the broader economy, the Fed is likely to adopt a cautious approach going forward, and will likely increase commentary around the impact the relative strength of the currency is having going forward. Rate hikes in the near future would likely exacerbate problems in the export and manufacturing sector, and the Fed will be keeping this in mind at the June policy meeting.

The minutes from the last policy meeting released earlier this week reflected growing concern about current bond market volatility, and over extended valuations in the stock market. Examining the minutes in detail reveals a more proactive stance by the Fed in trying to jawbone the equity markets onto a more sustainable path without having to use the threat of an actual rate hike.

Some of the more noteworthy commentary includes:

In their discussion of financial market developments and financial stability issues, policymakers highlighted possible risks related to the low level of term premiums. Some participants noted the possibility that, at the time when the Committee decides to begin policy firming, term premiums could rise sharply—in a manner similar to the increase observed in the spring and summer of 2013—which might drive longer-term interest rates higher. In this connection, it was suggested that the tendency for bond prices to exhibit volatility may be greater than it had been in the past, in view of the increased role of high-frequency traders, decreased inventories of bonds held by broker-dealers, and elevated assets of bond funds.

A few anticipated that the information that would accrue by the time of the June meeting would likely indicate sufficient improvement in the economic outlook to lead the Committee to judge that its conditions for beginning policy firming had been met. Many participants, however, thought it unlikely that the data available in June would provide sufficient confirmation that the conditions for raising the target range for the federal funds rate had been satisfied, although they generally did not rule out this possibility. Participants discussed the merits of providing an explicit indication, in postmeeting statements released prior to the commencement of policy firming, that the target range for the federal funds rate would likely be raised in the near term. However, most participants felt that the timing of the first increase in the target range for the fed-eral funds rate would appropriately be determined on a meeting-by-meeting basis and would depend on the evo-ution of economic conditions and the outlook. In keeping with this data-dependent approach, some participants further suggested that the postmeeting statement’s description of the economic situation and outlook, and of progress toward the Committee’s goals, provided the appropriate means by which the Committee could help the public assess the likely timing of the initial increase in the target range for the federal funds rate.

On balance, April CPI has gone some way in postponing any imminent rate hike which could have some bearing on the USD in the coming days and weeks. Yellen’s commentary later today will prove crucial for market sentiment. We stay tuned.