What is Quantitative Easing?

Aggressive monetary policies focused on stimulating economic growth in the face of the deflationary environment which has been in full swing since the financial crisis of 2008 have been the bedrock of the current economic system for nearly a decade. The Federal Reserve initiated its QE program with the direct aim of averting the severe deflationary effects which were occurring throughout the American economy and as a last gasp measure to help shore up the banking system which was teetering on the brink of failure following the multi billion dollar losses incurred from subprime mortgages. 7 years on, the Fed has only just exited from its bond buying program leaving a considerable growth in both its balance sheet and the overall money supply within the economy.

How does QE work?

Despite QE being such a prominent component of the financial landscape it is still a relatively misunderstood concept. Although most investors are aware of the consequences QE has had on the investment environment, many still remain unclear on the internal mechanics of how the QE process works.

QE is often referred to as a “money printing” program – and in some ways this image remains the best way to understand what the central bank is trying to do.

Firstly it’s important to clarify, money printing does not refer to the physical printing of cash or bank notes which the central bank is then tasked with arbitrarily dropping from helicopters or delivering to commercial banks via armored delivery trucks. In the modern economy – quantitative easing occurs through a more subdued digital form. Central banks create money by purchasing assets from the private sector in order to inject more money into the economy. The most conventional form of asset purchases is buying government bond portfolios from commercial banks. In the United States, there are several “Primary Dealers” which are responsible for dealing in bonds directly with the government. These dealers comprise of the usual big banks including Citibank, JP Morgan, Morgan Stanley, Goldman Sachs and Bank of America. The primary dealers are in effect, middlemen who buy bonds issued directly from the US Treasury, and then in turn selling them to investors both domestically and internationally – primary dealers in this respect are an important cog in the government’s spending machine. Besides selling these bonds to investors, commercial banks also hold government bonds on their own books as interest generating assets as part of their overall portfolio. These three actors, the government, the Fed, and the primary dealers then engage in a series of transactions in order start the QE ball rolling. 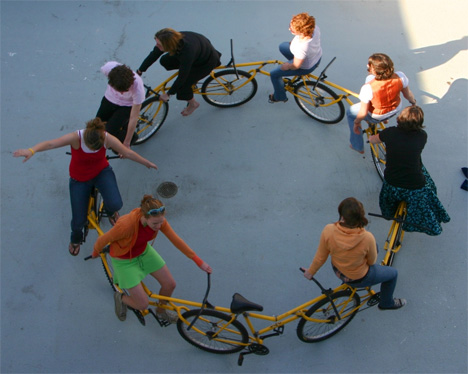 The transmission of QE throughout the economy happens in a series of steps between all of the relevant institutions including the Fed, Treasury, commercial banks, and investors.

By analyzing the 4 steps of QE in detail, we can see that the system is a complex series of transactions and interactions between the Government, the Federal Reserve and commercial banks. One of the main criticisms of QE so far has been the failure commercial banks to provide enough loans for productive parts of the economy. Loan growth has been primarily centered in areas such as education, and refinancing loans to large corporations. The transmission mechanism has failed in providing a large enough jolt in consumer and small business credit growth capable of boosting economic growth. Although the Federal Reserve has been in taper mode since October 2014, other central banks around the world have stepped in to make up the slack. The ECB and Bank of Japan are engaged in sizeable QE programs of their own and the concept looks set to be part of the economic and investment landscape for the foreseeable future.