It’s been an extremely active week in terms of the economic indicators, market activity, and rhetoric that is driving today’s interest rate and inflation discussions.

Heading into the week, investors all seemed to be in “coin flip” mode as to the tone Janet Yellen would take as she testified before the Senate and then the House on Tuesday and Wednesday. The Treasury market had started to forecast a spike in inflation expectations prior to her testimony, as the 10-yr yield rose nearly 50 basis points in a matter of a few sessions.

In her statement on Tuesday, Chair Yellen gave an update on the economy and the Fed’s current outlook for inflation and monetary policy. True to her nature, she came out dovish, not specifying an exact target date for the first rate increase, instead reminding us that the Fed is very data-dependent right now. She noted that while the economy was strong, there was “still room for improvement” in the labor market.

Yellen also noted that the Personal Consumption Expenditure metric (the Fed’s preferred inflation reading) was still tracking well below the Fed’s desired target of 2%, and that Q1 PCE “looks to fall further” than even the weak reading we saw in Q4 of last year. 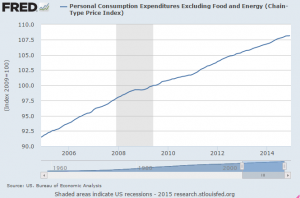 Forced to be a Global Fed

As I’ve noted in previous postings, Yellen and the Fed feel compelled to look around the globe when trying to assess the prudence of raising rates in June, September, or anytime in 2015. Massive deflationary forces are coming into the U.S. as crude oil stands 50% lower than a year ago, while growth is noticeably slowing in China and most advanced economies. Yellen did note however on Tuesday that low crude oil prices were a “significant plus” to the economy over the remainder of 2015.

On Thursday, we got the all-important CPI for January, and it read much like Yellen hinted it would. The headline reading was (0.7%) versus a consensus estimate of (0.6%). The Core CPI (ex-food and energy) was up a shade a 0.2%, a tick better than the consensus view. Notable breakouts were food costs flat month/month, energy prices that were down 9.7% and gas prices that were down 18.7%; the latter two have been falling sharply for quite a few months now but the Fed seems intent on “looking through it” for the time being, and has intimated that they can start raising rates even if the headline inflation rate is sitting below the targeted 2% range. As it stands now, the trailing 12-month change in the core CPI is now 1.6%, unchanged from December.

An important component to come out of the Bureau of Labor Statistics yesterday was real average hourly wages up 1.2%, on a nominal gain of 0.5%. This now puts the YoY change in real wages at 2.4% on a seasonally-adjusted basis, an encouraging reading for those of us who want to see the Fed Funds rate get inched upwards as soon as possible.

Other regional Fed Presidents have made some public comments this week echoing the same general theme that the economy is strong, and that the Fed currently has the data to support an initial rate hike anytime in the back half of the year. San Fransicso head John Williams noted yesterday that wage inflation was key, as “The cosmological constant is that if you heat up the labor market, get the unemployment rate down to 5% or below, that’s going to create pressures in the labor market”.

While the CPI continues to read weak, the Durable Goods orders came in stronger than expected for January, and the revised Q4 GDP figure that came out this morning was slightly higher than estimates at 2.2%. These bode well for continued labor market gains, which should be the key to a moderate rate increase cycle late this year. 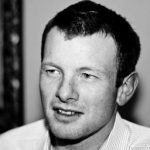 Ryan is a financial analyst & forecaster. He has 20 years of experience in asset modeling, investment analysis/general dd, portfolio management, and macroeconomic analysis. To that end, he has worked extensively with equities, fixed income, commodities, private equity, currencies, and derivative products. His commentary and educational library appear on Investopedia.com, and analysis has appeared in Barron’s, WSJ.com, TheStreet.com, and Forbes.com.